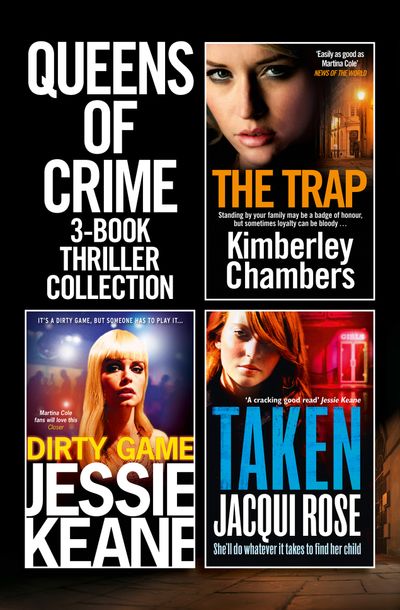 THE TRAP by KIMBERLEY CHAMBERS
The heir to Martina Cole’s crown with a story of murder, the underworld, violence and treachery. When it comes to family they look after business and make their mother proud. Nothing and no one can bring the Butler’s down.

For longer than she cares to remember Annie Bailey has lived in the shadow of her older sister Ruthie. Now Ruthie has her hands on Max Carter, the much feared head of the Carter family and a top class villain.

Seducing Max wasn’t a problem, but the guilt, shame and anger of rejection afterwards was.

Annie has unwittingly placed herself between two rival gangs and upset too many people, and these kind of people don’t forget. But as everyone knows, Annie Bailey is no ordinary woman.

Casey Edwards has demons to put to rest. Since she had to give away her baby at 15, she’s been lost in booze and bad company. But now she wants to find her child and put things right…

Heading to Soho, Casey meets former gangster Vaughn Sadler, an old-school hard man who can still handle himself – and anyone else. There’s a spark between Vaughn and Casey but she can’t let herself get hurt, not again.

Author: Kimberley Chambers, Jacqui Rose and Jessie Keane
Format: eBook
Release Date: 20/11/2014
ISBN: 978-0-00-811531-9
Sunday Times #1 bestselling author Kimberley Chambers lives in Romford and has been, at various times, a disc jockey and a street trader. She is now a full-time writer.Join Kimberley’s legion of legendary fans on facebook.com/kimberleychambersofficial and @kimbochambers on Twitter