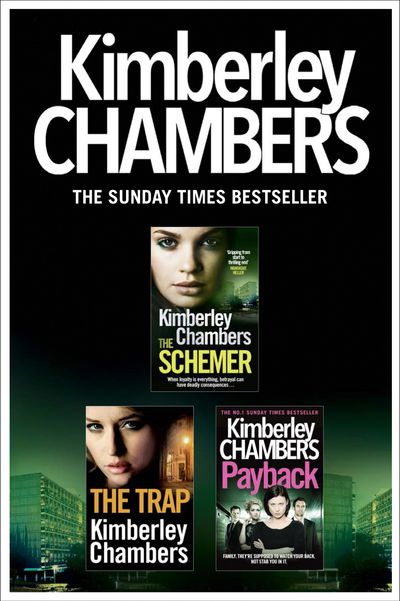 The Schemer
The Trap
Payback

THE SCHEMER
It’s 1983 and Stephanie Crouch is desperate to escape the council house she shares with her overbearing family, but at fourteen years old she has nowhere to go.

When Stephanie meets East End wide-boy Barry, his cockney charm and quick tongue soon have her head over heels in love. But too young to control their fate, Stephanie and Barry are torn apart, and Barry is heartbroken Stephanie falls for his best mate, still left in London…

Ten years later, Barry returns to England, and within a month Stephanie’s happy world is turned upside down.

Is Barry to blame? Or should Stephanie look elsewhere to find the schemer who has ruined her life?

Author: Kimberley Chambers
Format: Digital download
Release Date: 21 May 2015
Pages: None
ISBN: 978-0-00-814134-9
Sunday Times #1 bestselling author Kimberley Chambers lives in Romford and has been, at various times, a disc jockey and a street trader. She is now a full-time writer.Join Kimberley’s legion of legendary fans on facebook.com/kimberleychambersofficial and @kimbochambers on Twitter

”Praise for Kimberley Chambers:'[Kimberley Chambers is] the queen of the gritty, low-life tale . . .a fast-paced, thrill-a-minute ride that takes you on all sorts of twists and turns” - Bella